Transient dynamics in the Edwards-Wilkinson model

We study the Langevin dynamics of an interface within the Edwards-Wilkinson model (or equivalently  the Rouse chain model for a polymer). We develope a functional Fokker-Planck approach in order to study the effect of pinning of a single monomer and the effect of killing of the monomer (absorption).

Distribution of the center of mass of interfaces 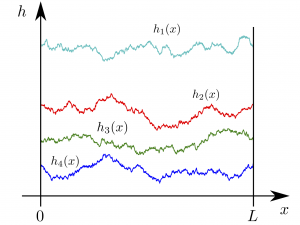 In this article we consider the distribution of the fraction κ=N1/N of top interfaces. Using a mapping on a random matrix problem (within the Laguerre ensemble) we are led to study the distribution of a truncated linear statistics of the eigenvalues of Wishart matrices.

Counting equilibria for a directed polymer in a random environment

At T=0, an elastic line in a disordered medium submitted to a uniform force field is pinned by the disorder for a force below a critical threshold fc. We consider this problem by studying the average number of equilibria (stable or unstable).

We establish an interesting connection between the counting problem and the Anderson localisation of wave by a random potential.