Introduction.– An invariant ensemble of random Hermitian or unitary matrices is defined by a probability measure over a set of matrices, which is invariant under unitary transformations. In this case, the eigenvectors and the eigenvalues are uncorrelated and the statistical properties of the matrices can be characterised by the joint probability distribution function of the eigenvalues, generically of the form

where the function φ(λ) depends on the ensemble. β=1, 2 or 4 is the Dyson index corresponding to orthogonal, unitary or symplectic symmetry classes. The presence of the Vandermonde determinant ∏i<j|λi-λj| characterizes strong correlations between eigenvalues (level repulsion). Examples are

Linear statistics of eigenvalues are observables of the form

where f(λ) is a given function. They appear in many concrete applications of random matrix theory. Most famous examples concern the electrical properties of a two terminal chaotic quantum dot. Coherent transport of electrons can be studied within the Landauer-Büttiker approach, i.e. by a set of transmissions probabilities Ti ∈ [0,1], which can be shown to correspond to the eigenvalues of the Jacobi ensembles (at zero magnetic field: JOE or JSE, without or with strong spin orbit interaction, respectively ; with a strong magnetic field : JUE) :

N is the number of open electric channels (number of transverse modes for the electric waves travelling in the contacts playing the role of wave guides) and V is the voltage drop between the two contacts. More information about electric transport in chaotic quantum dots can be found in the famous review of Carlo Beenakker : Random-matrix theory of quantum transport, Rev. Mod. Phys. 69, 731-808 (1997) and references therein [for a more recent overview, see : Pierpaolo Vivo, Satya N. Majumdar, and Oriol Bohigas, Probability distributions of linear statistics in chaotic cavities and associated phase transitions, Phys. Rev. B 81, 104202 (2010)].

Our contributions.– We have considered several examples of linear statistics and have studied their statistical properties with the Coulomb gas technique. Interestingly, the analysis of the large deviations (rare, or atypical, fluctuations) can be related in some cases to phase transitions in the underlying Coulomb gas.

We study the Wigner time delay of chaotic cavities within a random matrix approach (RMT). The analysis of Wigner time delay, partial time delays (derivatives of scattering phase shifts with respect to the energy) or proper time delays (eigenvalues of Wigner-Smith time delay matrix) have attracted a lot of attention at the end of the 90ies in the context of 1D disordered systems [Jayannavar,  Vijayagovindan & Kumar, Z. Phys. B – Condens. Matter 75 (1989) 77 ; Heinrichs, J. Phys. Cond. Matter 2 (1990) 1559 ; these first results were later corrected and the universality, suggested in Comtet & Texier J.Phys.A 30, 8017 (1997), explained in : C. Texier & A. Comtet, Phys. Rev. Lett. 82, 4220 (1999)] and chaotic cavities. An important step in this history was the discovery of the joint distribution for the proper time delays by Brouwer, Frahm & Beenakker [Phys. Rev. Lett. 78, 4737 (1997)], using the « Alternative Stochastic Approach » introduced slightly earlier by Brouwer & Büttiker [Europhys. Lett. 37, 441 (1997)]. Despite the joint distribution of proper times is known since 1997, little is known about the distribution of their sum, the Wigner time delay, despite the interest of this question in relation with charging effects in mesoscopic coherent conductors (cf. work by Markus Büttiker and coworkers). The distribution of the Wigner time delay is known for N=1 [Gopar, Mello & Büttiker, Phys. Rev. Lett. 77, 3005 (1996)] and N=2 conducting channels [Savin, Fyodorov & Sommers, Phys. Rev. E 63, 035202 (2001)]. The exponent of the power tail of the Wigner time delay distribution has been conjectured to coincide with the one of the marginal law for partial times, based on the heuristic picture of resonances [Fyodorov & Sommers, J. Math. Phys. 38, 1918 (1997)]. More recently, Mezzadri & Simm shown how to derive systematically the cumulants of the Wigner time delay by a generating function approach (math-ph arXiv:1206.4584), and gave explicitely the four first cumulants [note that the leading order of the variance has been derived for the first time (for β=1) some time ago in the pioneering work : Lehmann, Savin, Sokolov and Sommers, Physica 86D, 572 (1995) and is included in  Brouwer & Büttiker’s results [Europhys. Lett. 37, 441 (1997)].

In this article we derive the distribution of the Wigner time delay in the limit of large number of conducting channels by a Coulomb gas approach. We show that it presents a rich structure. Interestingly, the emergence of the power law tail is related to a second order freezing transition in the Coulomb gaz.

Quantum RC circuit : Statistical properties of the complex admittance in a one contact mesoscopic conductor

The linear DC transport properties of chaotic quantum dots have been widely studied (see references given above). The AC transport has been much less analysed. Pioneering works are those of Piet Brouwer and Markus Büttiker, Europhys. Lett. 37, 441 (1997), where the two first moments of G(ω) have been derived. By analysing their large deviations, we have studied more carefully the capacitance and the relaxation resistance in the zero temperature regime. This has required to consider the joint distribution of two linear statistics in the Laguerre ensemble, ∑i 1/λi and ∑i 1/λi2, which has led, for the first time, to a 2D phase diagram for the Coulomb gas in the context of large deviations of linear statistics. 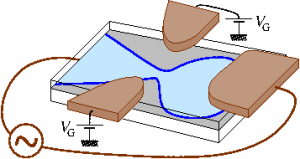 We have analysed this problem with the Coulomb gas technique. In a first article we have considered the case where an additional constraint is introduced and the sum runs over the largest (or smallest) eigenvalues λ1>λ2>…>λK>λK+1>…>λN:

In a second paper we have removed the addtional constraint on the ordering of the eigenvalues, so that the truncated sum does not necessarily involve the largest (or the smallest e.v.).
This leads to a different phase diagram.

In a chaotic quantum dot with ideal coupling, the distribution of the scattering S-matrix is simply uniform over the unitary group, with in particular <S>=0. For non-ideal coupling, <S> is finite (e.g. =±1 for total reflexion). Starting from a mimimum information principle, Mello, Pereyra and Seligman [Ann. Phys. 161, 254 (1985)] have derived the distribution of the S-matrix in this case, which is known as the Poisson kernel. The result was later rederived by Brouwer from a more microscopic approach [Phys. Rev. B 51, 16878 (1995)].
In the following article, we ask the same question for another fundamental matrix characterizing temporal aspects of the scattering process, the Wigner-Smith matrix Q=-iS†∂ωS. Starting from the known distribution of Q for ideal coupling [Brouwer, Frahm & Beenakker, Phys. Rev. Lett. 78, 4737 (1997)], we obtain the distribution for non-ideal coupling. We study more precisely the distribution of its trace (the Wigner time delay), which plays an important role in applications as it provides a measure of the DoS of the open system.