The conference will take place in:

How to reach LAL

The easiest way to reach the LAL from Paris is to take the RER B line from any RER B station in the centre of Paris (eg. Luxembourg) and then get off at the Orsay-Ville station. This trip takes about 35 minutes from the center of Paris; add about 10 minutes to walk between the station and the auditorium.

From Paris by local transport:

The easiest way to reach the Orsay campus is by taking the RER B line to the Orsay-Ville station (35 minutes from Châtelet, around 4€ for a single ticket). During working hours, you will find a train from Paris in the direction Saint-Rémy-lès-Chevreuse every 12-15 minutes. You should plan around one hour door to door from your hotel in Paris to the campus. The main train stations in Paris (Gare du Nord, Gare de l’Est and Gare de Lyon) are connected to the Metro/RER system going to Orsay-Ville. At the RER station, take the RER B going to Saint-Rémy-lès-Chevreuse (and not to Robinson!!), getting off at the station Orsay-Ville. Please consult the RER and METRO map for the Paris region below.

Important: Please do not mistake the RER B station Orsay-Ville for the Paris metro station Musée d’Orsay (the famous museum). From Paris, you must buy a ticket specifically for Orsay-Ville. A Paris metro ticket is not sufficient!.

There are two RER stations for the Charles de Gaulle (CDG) Airport:

Take the Orlyval (Automatic rail link connecting to RER line B) to the Antony station and then transfer to the RER B going to Saint-Rémy-lès-Chevreuse (and not to Robinson) and get off at Orsay-Ville.

Walk from Orsay-Ville station to LAL

After arriving at the RER B station Orsay-Ville, exit station and take to the left the pedestrian tunnel that crosses back under the railway go down the street rue E. Desjobert, following the Orsay University arrow. At the bottom of the hill, turn left to the street rue de Launay and go straight following the road that crosses the Orsay campus. The auditorium and the main LAL entrance (building 200) is on the left, around 10 minutes walk from railway station. Click the map below for detailed directions from the Orsay-Ville to the auditorium. 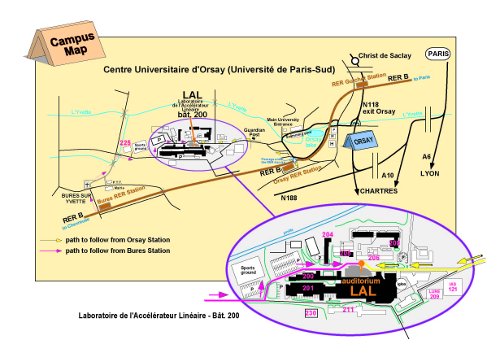